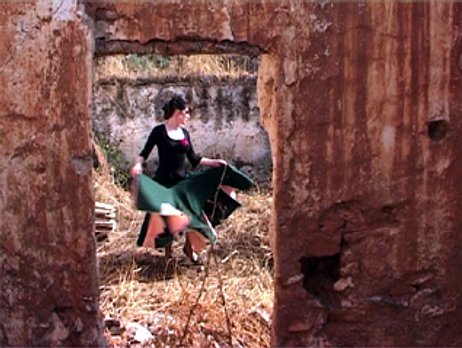 The subject is the ‘sublime’ and shows the relationship between landscape, film and poetry. This is a visualisation of three Spanish poems using modern dance with flamenco influences and an especially composed soundtrack based on Medieval Arabic Music from Seville specially composed to picture. The poems are the famous stanza from Federico Garcia Lorca’s “Romance Somnambulo”, “La Gitanilla” by Miguel Cervantes Saavedra and “Galerias” by Antonio Machado.

It is again the art theory of the American sublime which is explored here. Thoreau, with his idea of creating an experience where the viewer transcends his environment and is transported to another level of experience contains the driving concept behind the film. Combined with Kant and his theory of the sublime allowing a contemplation of the enormity in the mind of an experience, make this film a unique experience.

The cast, crew and director have a distinctly international flavour. Maureen McCue and Hilary Preston are Americans, Gabriel Nuzzoli is Italian, Pedro Brandao is Brazilian and Xavier Fernandez is from Catalonia, Spain.

Available in Spanish and English