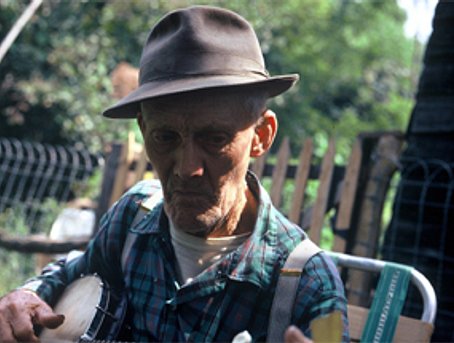 FINE TIMES AT OUR HOUSE

This is a documentary about old timey mountain music in the Appalachian mountains of West Virginia. Shot in Marlinton, Sugar Grove, Devil’s Backbone and Hell for Certain, this film tells the story of the Hammons Family, Maggie who sings Childe ballads acapello and old timey ballads accompanied by her brother Burl on the fiddle while she also plays the fiddlesticks. Sherman plays the banjo in his cabin on top of a mountain.

Cousin Lee makes dulcimers like they always did up the hollers and also plays the banjo. Also featured is young up and coming banjo star, D-wight Diller who is being taught by Lee Hammons.

Rounder Records recorded the Hammons Family later in the 1970’s (album entitled “Shaking Down the Acorns”).  A copy of the film on 16mm resides at the Smithsonian Institution’s Folk Archive in Washington, DC.  It was the winner of the Maya Deren Award, 1972 with a citation from the judges given:
“for the film’s profound sense of people and music; for its original approach to a non- original subject; for its revealing and sympathetic depiction of a little known facet of American culture which was difficult for the filmmakers to penetrate; for its documentary value as a recording of a segment of life that may be passing away; for its sense of truth’.The judges for the competition were; Professors John Lord, Gerald Noxon and Robert Steele. It was shown at various anthropological, folk and music film festivals as well as the Whitney Museum, NYC, 1973.

In 2013, Dwight Diller, the banjoist in the film completed a DVD box set called "Across the Yew Pines", which represents 40 years of recording music by the Hammons Family and Lee Hammons. Chapter 4 contains the full film "Fine Times at Our House." The box set is housed with the Smithsonian Institute in Washington, DC. To ask how to obtain copies of the box set contact:dillerbanjo@hotmail.com or  dillerbanjo@yahoo.com