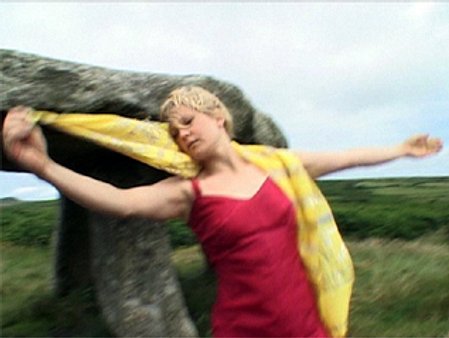 A film about the ‘sublime’, “The Third Narrative”, shows the relationship between landscape and painting. The film relates those aspects of Greek mythology, which show the steps for inspiration to women artists. It concludes that for women the landscape can be within. Filmed in Cornwall, UK, it shows the work of the painter Partou Zia Cook and relates it to the unique Bronze Age and post-industrial landscape of West Penwith via poetry and dance.

The cast, crew and director have a distinctly international flavour. Maureen McCue and Hilary Preston are Americans, Gabriel Nuzzoli is Italian, Dominique Rivoal is French. The poets include four Americans, Dickinson, McCue, Kavounas and TS Eliot (who also doubles as an Englishman). Dowden, Moore and Todhunter were Anglo Irish.

Shown as a video installation at Newlyn Art Gallery, Near Penzance, Cornwall, UK in 2003.